Great piece on the challenges that Google has in relation to time and user interaction models on mobile. Search provided consumers with simplicity of discovery and pathing on desktop, but on mobile the user journey is more fragmented and also a single tap to discover (and with voice interfaces even easier) so the number of searches per day, per user is dramatically less on mobile than desktop. This is creating an exponential challenge for Google, as Apple integrates search into the core iOS, Android is an open OS, so is not one flavour on all mobiles and also the tap/app/tap/app model means that consumers have the information they are interested in right there …no need to use the Google box to navigate to it.

The Overspill: when there's more that I want to say 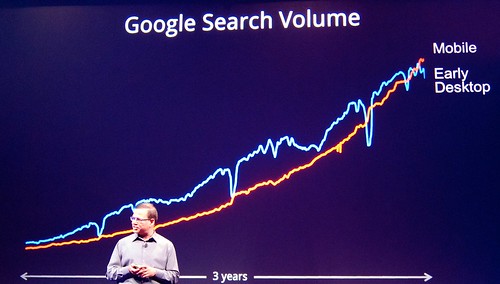 Amit Singhal in 2011 showing a comparison of search volumes from mobile and “early desktop years”. Photo by Niall Kennedy on Flickr.

Amit Singhal, Google’s head of search, let slip a couple of interesting statistics at the Re/Code conference – none more so than that more than half of all searches incoming to Google each month are from mobile. (That excludes tablets.)

This averages out to less than one search per smartphone per day. We’ll see why in a bit.